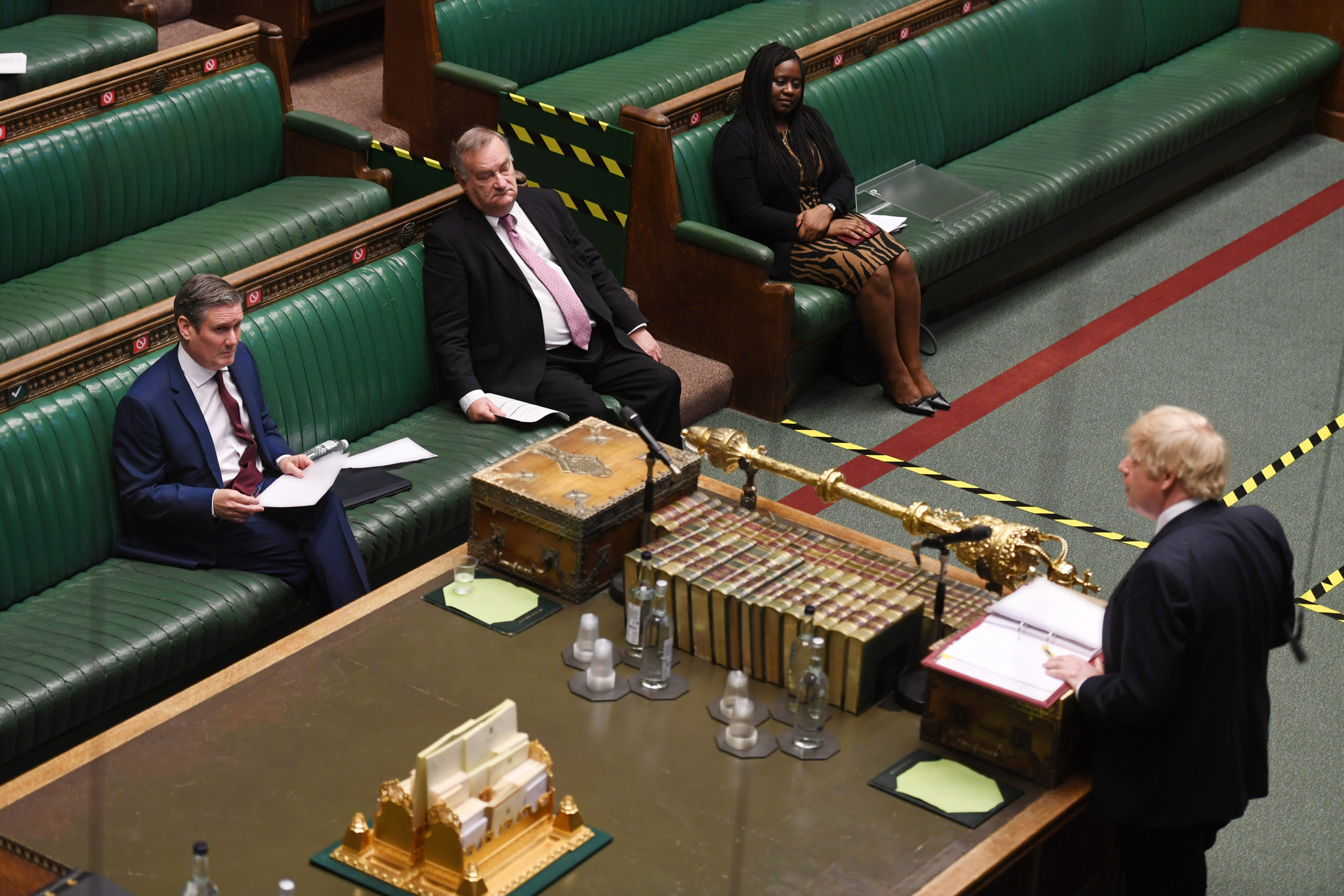 The first meeting in the House of Commons between British Prime Minister Boris Johnson — recently recovered from a life-threatening bout of COVID-19 — and Keir Starmer, just one month into the job as Labour Party leader, ushered in what Westminster-watchers will hope is a compelling new personal-political rivalry — played out over the despatch box every Wednesday.

The regular question-and-answer session in the House of Commons, once a must-see fixture of the political week where MPs grill the prime minister, has been very much in the doldrums of late.

Neither former Prime Minister Theresa May nor her opponent Jeremy Corbyn were natural performers (to put it kindly), and for much of Johnson’s tenure, Corbyn had been a leader heading for the exit door. His replacement Starmer is already regarded by many Tory MPs as a more formidable opponent.

It has become a cliché to say that Starmer, a former director of public prosecutions, will bring a lawyerly, forensic approach to scrutinizing the government — one that the engaging, charismatic but not always across-the-detail prime minister may be vulnerable to. But if the first PMQs contest between the two men is anything to go by, it’s a cliché well-grounded in truth.

Here are five takeaways from their first meeting.

The coronavirus response is political now …

Although questions have been asked about how much Starmer can afford to criticize the government at a time of national crisis, and despite some appeals from Tory MPs for no “political point-scoring,” it is now clear that the crisis has become fundamentally political.

A week ago, Johnson had said that “many people were looking at the apparent success of the government’s approach,” Starmer began. But on Tuesday, the U.K.’s officially recorded COVID-19 death figures rose above Italy’s to become the highest in Europe, and second-highest in the world. “That’s not success, or apparent success, so can the prime minister tell us: How on Earth did it come to this?” Starmer asked.

Johnson responded with the now-familiar refrain from government (and, in fairness, some independent statistical experts) that international comparisons are difficult at this stage with countries recording deaths differently and some slower than others to register them.

Be that as it may, it is beyond doubt that the U.K. has fared badly. And Starmer — with follow-up questions on deaths in care homes and the government’s failure to have in place capacity, at the start of the crisis, for an extensive test, trace and isolate strategy — showed that he’s decided that the government is, in part, to blame and isn’t afraid to show it.

… But getting the tone right is still tricky

Johnson appeared to be trying to take the heat out of Starmer’s attacks by conceding that there had been difficulties tackling the virus, and that he shares some of his opponent’s frustrations. He hopes, he added, that Starmer would “work with him” to get the economy “back on its feet.”

The tactic appears to be to try to keep the opposition onboard, to be constructive and therefore to — indirectly — make any criticisms look like unhelpful politicking.

Johnson is meeting opposition leaders, including Starmer, on Thursday to update them on the situation, and it remains a dilemma for Starmer: Just how critical should he be, and at what point does he fall into the government’s trap and allow himself to be portrayed as an unhelpful mudslinger at a time of crisis?

Starmer was careful to praise the national efforts of health and care workers and to sound constructive where possible, and was suitably polite in welcoming a recovered Johnson back to the Commons and congratulating him on the birth of his son.

“Starmer scores a hit,” was the verdict of one former Tory Cabinet minister.

“He did better than Corbyn. He could hardly fail to,” said another.

In fairness to the former Labour leader, despite his staccato delivery and occasional failure to think on his feet, Corbyn did bring innovations to PMQs, the main one being questions from members of the public, an approach now adopted by the government’s daily coronavirus press conferences.

Starmer took a different tack: Instead of Corbyn’s righteous fury, he slowly and deliberately constructed a case. And while he will want to be seen to be speaking for the people, he did not deploy Corbyn’s tactic.

The most obvious courtroom technique deployed by Starmer at Wednesday’s session was the flourishing of the government’s own paperwork to counter a point made by Johnson.

As one worried Tory MP told POLITICO: “Starmer is a prosecuting lawyer, and it is going to be the case for the prosecution every week, with Boris as the accused.”

It’s a classic clash of styles

There’s no getting away from how different the two leaders are, although the contrast was not overly striking this Wednesday, with Johnson in an understandably subdued mood due to the seriousness of the current moment. The contrast between the two men has previously been compared to that between the great Victorian political rivals Benjamin Disraeli (charismatic and roguish) and William Gladstone (high-minded and serious).

“Boris was constrained, given the circumstances, from barnstorming,” said the second former Cabinet minister. “I still think he is a better Commons performer, but he has a more accomplished opponent now.”

Tom Newton Dunn, the political editor of the Sun, the U.K.’s most-read newspaper, tweeted another historical comparison: “Roundhead v Cavalier. Starmer’s calm and forensic jabbing, countered by Johnson’s bombastic and rhetorical charm. But which will the voters prefer?”